This fall, people in California will vote on Proposition 46, which, if passed, will required doctors to submit urine screens to test for alcohol and drugs. Some doctors have stated that it is an invasion of privacy, while proponents of it argue that it is past due, as the medical profession has a huge role in the safety and well-being of the public. From the article in the New York Times:

Backers of Proposition 46 have begun putting out a steady stream of news releases about cases involving doctors with a history of drug and alcohol abuse. “It’s crucial: I can’t believe we haven’t done this already,” said Arthur L. Caplan, a medical ethicist at New York University. “We can argue about how often that is, and what to do if you are positive. But the idea that we wouldn’t be screening our surgeon, our anesthesiologist or our oncologist when we are going to screen our bus drivers and our airline pilots strikes me as ethically indefensible.”

The law makes sense. It should pass. 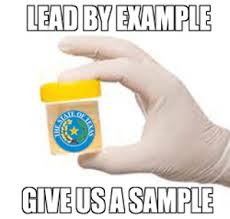