Over the weekend, an article appeared in the New York Times about a doctor who knowingly overprescribed oxycotin (and other drugs) to known drug dealers:

Dr. Li, an anesthesiologist from Hamilton, N.J., ran a pain management clinic one day each weekend in Flushing, Queens, where he saw dozens of patients a day, posted a price list on the wall for drugs that included oxycodone and Xanax and accepted payment primarily in cash. During closing arguments, prosecutors said Dr. Li was driven by greed and ignored warnings from emergency room workers and his patients’ relatives that he was placing lives at risk. His lawyer, Raymond Belair, countered that he was dealing with difficult patients, some of whom misled him about their substance abuse problems.

The case against Dr. Li was unusual because the office of New York City’s special narcotics prosecutor typically charges doctors accused of knowingly prescribing painkillers to drug abusers with criminal sale of a prescription for a controlled substance. Dr. Li was instead charged with manslaughter after Joseph Haeg and Nicholas Rappold, who were under his care, died. Though the tactic has been used in cases in several other states, it is rare in New York.

The story of doctors like the aforementioned Dr. Li are why there are prescription drug monitoring programs (PMP) in 49 of the 50 states. Missouri is the one state that does not have a PMP. Unsurprisingly, Missouri has a huge problem with the illegal acquisition and sales of prescription drugs. Today’s New York Times has a story about Missouri: America’s Drug Store. Foolishly, a few state lawmakers have refused to implement a PMP there:

But while proponents say the vast majority of the Legislature supports the measure, it has been blocked by a small group of lawmakers led by State Senator Rob Schaaf, a family physician who argues that allowing the government to keep prescription records violates personal privacy. After successfully sinking a 2012 version of the bill, Mr. Schaaf said of drug abusers, “If they overdose and kill themselves, it just removes them from the gene pool. There’s some people who say you are causing people to die — but I’m not causing people to die. I’m protecting other people’s liberty,” Mr. Schaaf said in a recent interview in his Senate office. “Missouri needs to be the first state to resist, and the other states need to follow suit and protect the liberty of their own citizens.”

Mr. Schaaf’s steadfast opposition has come under sharp criticism from fellow Republicans, including a United States representative, Harold Rogers, Republican of Kentucky, one of eight states on Missouri’s 1400-mile perimeter. “It’s very selfish on Missouri’s part to hang their hat on this privacy matter,” Mr. Rogers said. “The rest of us suffer.”

History informs us that Senator Schaaf can only impede progress for a time and that Missouri will eventually get her PMP up and running. In the meantime, the state suffers. But there are some interesting characters that have sprung up to fight the lack of a PMP. One of them is Richard Logan (pictured below), a dual-classed pharmacist and sheriff’s deputy.

On his office phone at L & S Pharmacy, Richard Logan listened as a doctor’s office detailed how a patient had just left with her third prescription for painkillers in only nine days — and was quite possibly getting more, illegally, elsewhere.Mr. Logan, 61, holstered two guns, slipped on a bulletproof vest and jumped into his truck. Because in his small corner of America’s epidemic of prescription drug abuse, Mr. Logan is no ordinary pharmacist. He is also a sheriff’s deputy who, when alerted to someone acquiring fraudulent drug prescriptions, goes out to catch that person himself.

“I’m only one guy, and for every person we get to, there are probably 100 who we can’t,” Mr. Logan said. “How many people have to get addicted and die for us to do what everyone else is doing about it?” 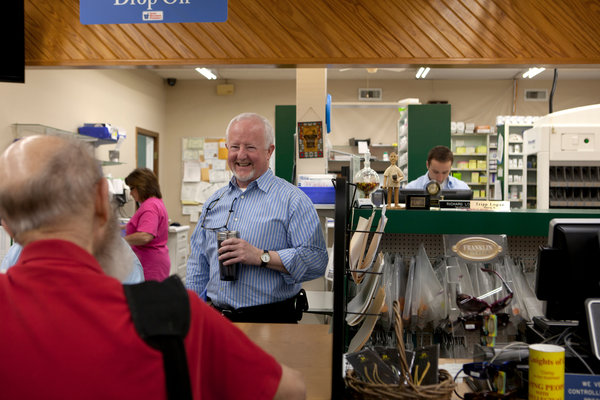