This piece was written under emotional duress. The subject matter caused (and still causes) a mix of stunned disbelief and anger. Before we get to the subject matter at hand though, permit me to share a semi-vulgar anecdote that explains the process of normalization.

My friend Andrew had a dog named Steve. Steve was a very friendly, but untrained, yellow lab. Andrew had a lot of problems with Steve. He ate his socks, chewed on his shoes, ate three garden hoses, sniffed crotches, jumped on guests and even once ate a steak that Andrew was seasoning on the kitchen counter (Andrew turned away for a moment, turned back and it was gone). One winter night Andrew heard banshee-like howling coming from his yard. He had never heard that tone and level of shrieking out of anything and (he would later tell me) “it made my hair stand on edge.” He proceeded outside, where he saw Steve limping around, then hopping, then limping again, all while shrieking terribly. This was around 10 pm. Andrew tried to make out the cause of the problem. While he was scanning for a bear or a trap attached to a leg, he noticed that Steve appeared to have a second tail. He did a double take. As he got closer, he realized that Steve had half a tube sock sticking out of his butt.

Andrew walked over, whispered and petted Steve and then tried to pull the sock out. It was wet, a little frozen and quite stuck. Steve yelled. Andrew said, “Sorry about this Steve,” and gave a very strong pull. The sock came out. Steve howled worse than before. Then he quieted down, went in the house and lied down to sleep. Andrew said to himself, “That’ll teach him to eat my socks.” A few weeks later, Andrew was watching a football game and Steve walked in front of him. He had a second tail again. Andrew did a double take, and then he realized Steve was not howling. The sock coming halfway out of his butt had become somewhat normal. That is a pristine example of normalization.

There are others. I’ve had dozens of clients tell me that their first experience in jail would be their last, because it was so incredibly horrible (the food, the 24 hour light, the hard metal bed, the boredom, the fear). A number of them returned to jail or even prison, and the second time wasn’t nearly bad as the first. They had become accustomed to it. Normalization. We can do this exercise for getting bad grades, domestic violence, horrific hangovers (how many of you reading this swore off booze because of a tremendous headache), brutal romantic relationships or a host of other behaviors that cause us pain that we later just accept as normal. Normalization.

I’ve been treating people with heroin problems since 2004. I’ve been talking about the spread of prescription opiate painkillers since 2005. I started conducting trainings on the heroin epidemic in 2010, chaired a Task Force on opiates in 2012 and we released a report in 2014. I’ve written about opiates and opiate policies a number of times on this site. I am horrified to write this next paragraph.

I was watching a football game the other day and this ad appeared on TV. I did not pay attention to it at first, and then halfway through I thought it was a Saturday Night Live skit. When it came on again, I gave it my full attention. Movantik is advertised as a drug that helps people who take opioids deal with the side effect of constipation. The ad shows the woman talking to her doctor, sitting in the park (pictured below) and of course, walking into the pharmacy with her opioid pill. Everywhere she goes, her opioid is with her. There are advertisements on television that show a person with their opioid 24/7 and taking other drugs to deal with the side effects. This is normal now. Constipation is just an irritating side effect of chronic opioid use, and now it can be dealt with through more medication. At no point is a question raised like, “Should she be on opiates?” (I wrote this four times before I took the adverb-curse out of here). Opiate use has been normalized in this country. So much so that it has a cartoon-pill figure on television ads for mass audiences. I expect we’ll see more of these. Andrew’s dog got used to having a half eaten sock stick out of his ass. We will get used to seeing opiates in our lives all the time. I am aghast. 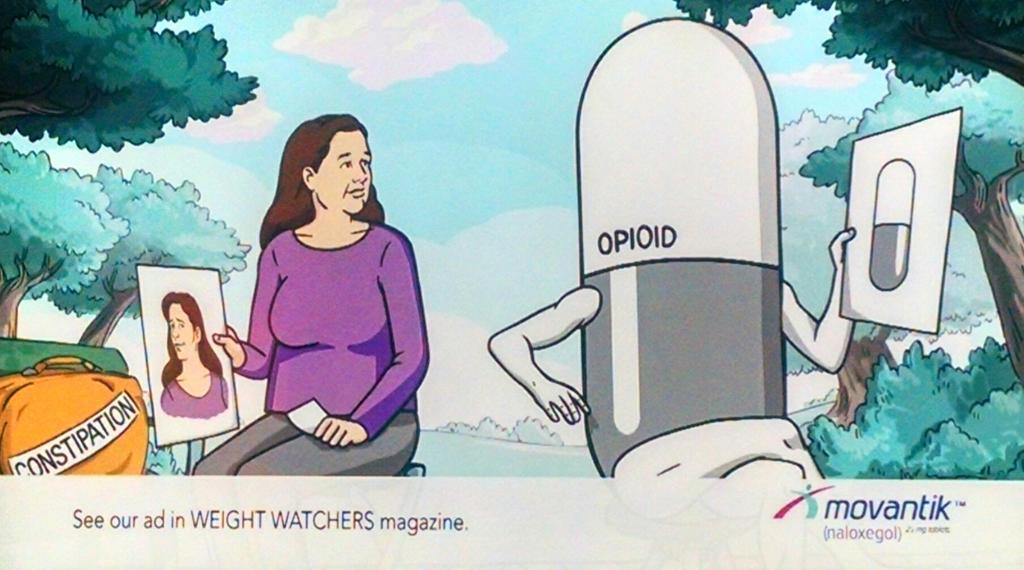 One thought on “The Normalization of Opiates”