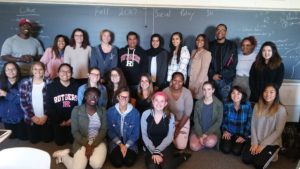 Last week I took my mother to see an incredible production of A Raisin In the Sun in Red Bank, NJ (it’s really good and there is a Surf Taco nearby, but the show ends on October 8th). Afterwards, we went for an early dinner. At the next table, two older women where talking about a current social/political issue. They lambasted the other side as being selfish and stupid, spouted off incorrect facts and statistics, and proudly clinked wine glass about how they agreed with each other. While I found their comments to be noxious, my bigger issue was with their process. People from both sides of the political spectrum often engage in personal attacks, have a lack of understanding of the issue (economic, historical), have incorrect or cherry-picked statistics, and tend to talk primarily with others that already already agree with them. They kept going on and on, and I found myself growing irritated. My first thought was a Larry David-esque “This is why I can’t go anywhere” and then I made the command decision to not engage them. This decision was made on the basis that (a) they are very entrenched in their position; (b) there were just two of them; and (c) they are old and not going to be voting too much longer anyway.

The first guest lecture I ever gave was to a sophomore honors English class when I was a high school senior. I was invited to talk about A Catcher in the Rye by a teacher who gave me a D a year and a half earlier. I finally read the book a year later after it was assigned and it spoke to me at 17 – it also inspired me to dive deep into other literature. Early on in college, I was invited to talk at both Rutgers and other colleges on the topics of addiction, Shakespeare, or 20th century American literature. By my third year in college, I was substitute teaching in high schools regularly, and I jumped at the chance to give lessons in history and English (ironically, the first class I ever subbed was French 3, which I failed as both a sophomore and senior). After graduation, I taught English to students as young as 12 and as old as 79 in Tokyo for all of 2003. After finishing a social work degree in 2006, I took a job teaching high school English in Elizabeth for the next three years (I’ve written about that before).

In 2008, I started teaching at the Summer School of Alcohol Studies at Rutgers, and have taught there continuously ever since (I also teach seminars throughout the year and have also been training NJ, NY and PA police through the Center for over a year now). In 2009, I started teaching at Essex County College. I taught multiple courses there for three semesters. In 2011, I began teaching at the Rutgers School of Social Work and also started co-teaching a course with Dean Lea Stewart at the Rutgers School of Communication. I have taught 2-4 courses each term between the two departments continuously now for 13 straight semesters.

During my last year of teaching at Elizabeth High School, I used a book titled Poetry 180. Every day, I read a different modern poem to my students and we discussed it. My favorite poem from that book was written by a woman who remembered herself as a high school sophomore writing to her father, “Dad, you are most yourself when you are swimming” it began (along with Shelley’s “Look on my works ye mighty and despair,” it is the two lines of poetry I utter the most). This has led to the question that I ask all of my students and everyone who has since sat in on a training that I’ve conducted – when are you most yourself? To answer this question, you might want to talk to your family, friends and co-workers.

Despite all of the many wonderful relationships and interesting activities I engage in, there is nothing that defines me nor shows me at my best nor makes me happy like teaching. And as much as I like conducting trainings and giving speeches, there is no teaching I like more than my in-person classes at the undergraduate level at Rutgers. This semester, I have 27 students in my Social Welfare Policy Class. I was asked to teach the course in August and it came with a ready-made, departmental syllabus. I’ve found the textbook to be quite good and I’ve kept the assignments but tweaked them a bit (the lectures are all mine). In our lessons on social and cultural issues, I spend a great amount of time talking about the history of the issue, how other states or countries have addressed it, the conservative and middle and liberal positions, and how it both currently and potentially could affect the budget. I have my students read pieces on the importance of listening to people you disagree with, which states take the most money from the Federal government, and a variety of other topics. I’m careful not to teach them what to think, but rather how to look at issues, know the economics, consider your opponents’ view (even if it is personally offensive), and how to talk to people that you disagree with (so basically, don’t be like those two old ladies at lunch last week).

Regardless of your politics, you may be frustrated by the fact that most issues that are topical today were being argued about 20, 50 and even 100 years ago. It takes a long time to finally settle social and political issues (it was 80 years between Seneca Falls and the 19th Amendment). Economic ones are constantly being refought. I’m not a fan of social media activism (though it may be able to swing elections). I don’t see the point of like-minded people sitting around and complaining to each other. Shouting at family or friends isn’t effective either. Change is often a long, slow process (water on a rock…the water eventually wins).

For those of you that are worried, concerned, or even outraged at recent events or regarding a number of social, political or economic policies, take some solace that I’m training these young people to be policy problem solvers. I have 100-150 undergraduate/graduate students a semester for 50 hours of instruction. This is my ninth year of university teaching, so I’ve put my thumbprint on somewhere between 1800-2700 young minds (I hope to do this for another 40+ years).

Some of my former students are now teaching and/or supervising others. For those of you that are horrified with the current state of things, I encourage you to take the long view. If you can, guide, mentor, supervise or teach someone younger than you. Each mind we truly touch eventually reaches out to someone else and thus, we become immortal, as our lessons are passed on long after we’ve shuffled off this mortal coil.